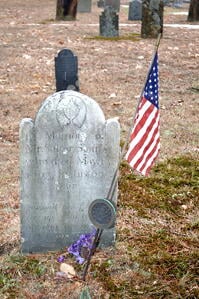 However, the theft of the memorial plaques from Kimball Park Stadium is not the first time that thieves have targeted memorials meant to honor great men and women from our past. In fact, the theft of plaques from memorial sites, not just in parks but from actual gravesites, has been going on for a long time.

The Putnam and the Wolf Plaque

This plaque, which honors the exploits of Revolutionary War General Israel Putnam, was donated by the Elizabeth Porter Putnam Chapter of the Daughters of the American Revolution organization in 1920. The DAR, which is comprised of the descendants of many of the Revolutionary War’s heroes, seeks to promote patriotism and preserve American history. Creating and donating the Putnam and the Wolf plaque was one way that the organization has helped to preserve our country’s history since they were founded on October 11, 1890.

The plaque itself is a large solid bronze metal plate engraved with a story from the general’s life. It is one of many dedications to the popular war hero and leader.

The plaque honoring Gen. Putnam was displayed in a large boulder in what is now the Mashamoquet Brook State Park in Pomfret, Connecticut from the date of the plaque’s donation until 1967, when the plaque mysteriously vanished.

After the plaque was brazenly stolen from its resting place in the boulder, authorities searched for it, but to no avail. Despite the best efforts of the authorities at the time, the plaque could not be found.

For more than fifty years, residents of the Connecticut community who lived in the area assumed that the plaque was gone for good, possibly having been melted down for the metal or sold to some eccentric private collector. Just last year, however, there was a break in this fifty-year old cold case.

On November 26, 2013, John Folsom, a former supervisor of Mashamoquet Park, alerted State Park Director Tom Tyler about tip he received that someone was selling the plaque on eBay. As incredible as it may seem, when Connecticut’s Department of Energy and Environmental Protection investigated the claim, they found that the casing marks on the plaque being sold via eBay matched the ones on the plaque in archived photos taken before the theft (DEEP’s Environmental Conservation Branch oversees the parks and other open spaces needed for the outdoor recreation needs of the public, which gave them jurisdiction in this case).

Law enforcement officials traced the digital signature of the eBay account to an antiques store in Vermont, where authorities finally recovered the plaque after more than half a decade of mystery surrounding the fate of the plaque. How the online seller of the plaque acquired it in the first place, whether that person inherited it from the original thief or bought it second-hand, is still unknown.

As of yet, no formal charges have been filed, as the original crime is well beyond the statute of limitations.

When interviewed in an article for the Norwich Bulletin, John Folsom stated that he was just “happy to have a piece of local history back.” However, Folsom also noted one mysterious coincidence regarding the sudden recovery of the plaque, as it coincided with the year of the 300th anniversary of the town’s founding, and the park’s 100th anniversary.

A Piece of History Recovered

Now that the plaque is safely back in the hands of the Connecticut DEEP, plans are in place to put the bronze plaque back on display, just not in the same place as before, for fear that it might be stolen again. However, the recovery of this plaque means more than just the end of a fifty-year old mystery. The return of this plaque to the Pomfret community marks a reconnection to their history.

This plaque not only commemorates the life and times of a Revolutionary War hero, it is now a part of the community’s history in its own right. While the full story of how it came to be in an antiques shop in Vermont may never be known, the fact that this piece of history survived for five decades without being destroyed is a testament to the durability and longevity of plaques as a means of preserving a story.

We here at In The News are fascinated by the way that a well-made plaque can preserve the story contained with it for decades. We feel that plaques are a great way to commemorate the most memorable moments of a life and share them with the world for years to come.

We hope that the “Putnam and the Wolf” plaque will once again proudly share the story of Israel Putnam and delight the Pomfret community for decades more, and that nobody absconds with this treasured community icon again.

For more information about how a plaque can immortalize your accomplishments, contact us today at 1 800 548 3993.