Have your car featured on a wall plaque!

I've always wanted my car featured in a magazine.

I'm new to the Florida area and if it's taught me anything while being here it's that Public Transportation stinks (literally and figuratively).

I moved here from Maryland (still horrible/non-existing Public Transportation) but the town was small enough it wasn't really needed. Anyway, moving down to Florida proved to be difficult, luckily I had friends that were willing to give me rides wherever I needed to go. I had saved up enough money before moving to get a cheap car off of the internet once I arrived in Florida, or so I had hoped. I bought a car off of the greatest website ever, Craigslist. It was a '91 Mustang LX Convertible in rough condition, luckily, with my roommate who has a deep love/hate relationship with Fox Bodies I figured we could fix anything that happened to go wrong. I was wrong. 3 used transmissions and 2 shops later I decide I just don't have the funds to keep up with this car. After a couple more months of surfing the internet, I find my diamond in the rough. A '93 Honda Civic Hatch, this thing is a TANK! I used to give Civics a hard time but they're some really nice cars. So far she's given me no problems. Here's hoping I got lucky!

I finally get to have fun now that I have a car that runs and is fairly cheap to modify, I have so much to learn about performance modifications and doing as much as possible myself. Not to mention learning how to drive a stick! That all in itself is proving to be way more fun!

For those of you who actually have the cars that I can only dream about driving and have had them featured in a magazine or newspaper.  In The News can take those beautiful cars and put those who are feataured on a wall plaque. Take minute and take a tour of our automotive page we have created and see the what we are talking about. 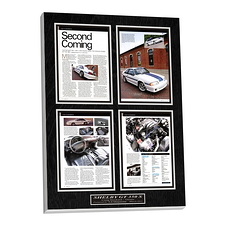 What we can do is take your digital photo and put it on the cover of a magazine.  We will let you fully customize you car or bike on a number of magazine covers.  Only certain magazine covers are available, contact us to see what we can do!  Get your car featured on a wall plaque!

It's not about the car you want it's about the car you have.  Celebrate your rides and your magazine featrues by immortalizing them and create a wall plaque from In The News.  Ask around we have great relationships with the "Car Industry"