At home last week watching the coverage of Hurricane Irene on CNN they showed a map covered with the letter (I) up and down the east coast.  The (I) represented one of 900,000 CNN I reporters sending in live up to date information on the events going on locally in communities and towns on how the hurricane was effecting them.

The news in real time told by real people, citizen journalism. News to me is something that happens in your neighborhood not something that happens half way around the world.  Meaning I would rather know about a grand opening in downtown Tampa (my city) than a grand opening in Michigan.  Most of the news unfortunately is tied into the national landscape and driven by advertising.

Newspapers are the same way.

What is interesting is the amount of venture capital being pumped into a paperless news stream of information.  Local news being delivered digitally without hard copy newspapers.  In other words what people in the industry are calling Hyperlocal. 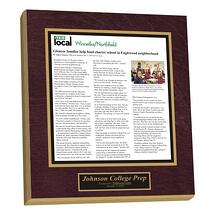 put in large amounts of dollars to fund an on line community based website called Patch.com.  A place where local individuals can share their opinions , comment on stories, list businesses all within a small community.

Right now they have 20-25 states currently involved and they have just been acquired by BuyWithMe a rival to Groupon and Living Social.  This might be the shot in the arm the local community news sites need.  Up until now every online local start up news community has been unable to sustain.  In other words they aren't making any money.

The problem with the hyperlocal news communities is that they can not find the funding or the advertising to stay in business.  As the print media scrambles to get their digital versions of the paper up and running which is another nightmare altogether.  There are 5-6 companies all after the same resources and they all charge different amounts to view their paper online.

Everyblock, OutsideIn, and Patch currently are not profitable. Why would it be a surprise to anyone that these companies are not making any money when at the same time a lot of  big newspaper companies are not making any money either. It seems to me like if the two separate ideas come together and work together they can be successful and then we all win out.

We can have our cake and eat it too.  If big brother would promote local news more like CNN I report we might benefit with a broader perspective and more information.

In order for us @ In The News to be successful in the future the old guard newspaper industry has to embrace the idea of community.  Sharing news information locally in real time and transmitting through bigger papers online can be done.