Bosses have gotten a bad wrap. We all have a boss; even if you don’t hold a conventional job you still have someone you're accountable to. So, who and why did someone come up with National Boss Day?

National Boss Day was started in 1958 when Patricia Bays Haroski, then 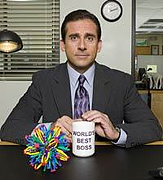 an employee at State Farm Insurance Company in Deerfield, Ill., registered the holiday with the Chamber of Commerce of the United States. She designated October 16 as the special day because it was her father's birthday. Ms. Haroski's purpose was to designate a day to show appreciation for her boss and other bosses. She also hoped to improve the relationship between employees and supervisors. So what are you going to do for your boss with coming Sunday or Monday? There are the usual, flowers, cards and maybe even lunch but, how about something lasting.

Did your boss get promoted this year?

How about getting a hold of the press release or company news letter on the subject and maybe a picture of your boss. We can make a beautiful wall plaque so he can remember this moment over and over again.

Was he or she featured in the company newsletter, on the website or in a trade magazine?

Again, I can do the same thing and you can present it at a luncheon or breakfast.

Don’t have either? Well how about a picture of all the staff on a digital camera.

I’ll have the photo printed and mounted as a plaque with an engraved plate that says “To a Great Boss from your happy Staff!" or anything that you would like the plate to say. We can even include the company logo!