When we say old articles clippings and documents we mean old.  Recently we where commissioned by the Church of God Inc to create a custom wall displays of two original articles one from 1923 White Wing Messenger and the other 1919 Church of God Evangel.

We at In The News appreciated the guest blog we received from John Wilkins that gives us the history of each article accompanied by the photos of the custom wall plaques our company produced.

Bishop Ambrose Jessup Tomlinson was born September 22, 1865 on a small farm in Westfield, Indiana. He felt called of God to a special work at a very early age while attending to the chores on his father’s farm but he had very little to influence him since he was not in church very often. While sitting near the cook stove in his home one day he nearly escaped death when a bolt of lightning hit the house. It missed him by only a few feet. This experience eventually led to his conversion and he was off and running for God.

His next venture was a paper known as “THE EVENING LIGHT AND CHURCH OF GOD EVANGEL” which was published for only one year. It rolled off the press with the first copy on March 10, 1910. It was renamed, “CHURCH OF GOD EVANGEL” in March 1911 and the subscription price was $1.00 per year or 5 cents a copy.

The next paper by this editor was known as “THE WHITE WING MESSENGER” with Vol. I, No. I rolling out on September 15, 1923 after the breakup of the original church which he was responsible for from Cherokee County, North Carolina. The subscription price was $1.50 or 6 cents per copy. This paper is still an official publication of the Church of God of Prophecy and is published through the auspices of The Pathway Press of the Church of God, Cleveland, Tennessee. 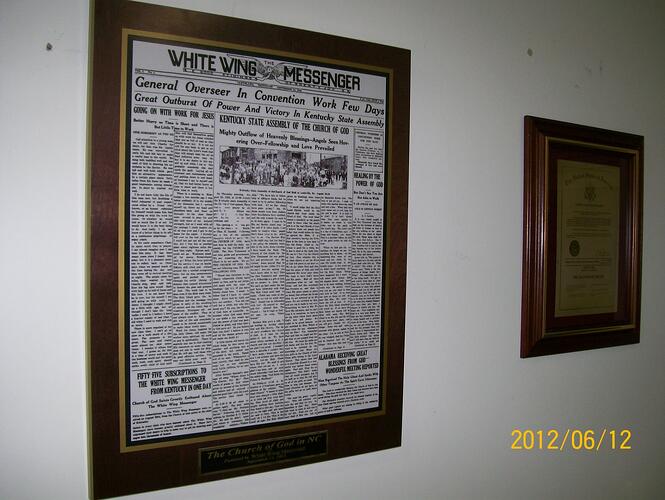 The next paper which clings to the same doctrine and practices of this great man of God and traces its roots to this same author/publisher and his discovery of The Church of God on June 13, 1903 is known as “THE BANNER OF TRUTH”. The first issue of this paper was dated August 1997 and is printed in house by THE BANNER OF TRUTH PRESS located at 310 West Edgerton Street, Dunn, North Carolina. The original “WHITE WING MESSENGER” bearing the date of September 15, 1923 has been preserved on a wall plaque beside the original of the “CHURCH OF GOD EVANGEL” dated October 25, 1919. These beautiful plaques grace our entrance to “THE BANNER OF TRUTH PRESS” department and were made for us by “IN THE NEWS” of Tampa, Florida.

A special thanks to “IN THE NEWS” for helping us preserve our history on our walls here at the International Headquarters of “THE CHURCH OF GOD OF NORTH CAROLINA” as we honor our former editor and publisher, Bishop A. J. Tomlinson who was called home October 2, 1943.

In The News can create and preserve old articles and documents we have been creating custom wall displays for 25 years.

Got something a little different in mind? No problem! We can preserve all kinds of documents & small items, including, but not limited to: photos, video & TV screenshots, book jackets, diplomas & certificates, wedding & event invitations, artwork, and small memorabilia. Don’t let your creativity stop us, we’re happy to satisfy your unique needs with a completely custom display piece. Ready to get started on your display? Give us a call @ 800-548-3993 or get started and learn more how to create your display.