Billionaire Bob was a plain person. Bob was 32 years old, living in his parents basement, in a very small town with his girlfriend, finishing his college education and living a very unexciting life. Bob was a dreamer. Bob dreamed of one day being able to do his own laundry, moving out of his parents basement, marrying his girlfriend and having children, and one day becoming famous.

During the holidays Bobs whole family would gather around the table and he would tell them that he dreamed of inventing something that would make him famous. The whole family would laugh as they remembered the many different inventions that Bob had made that failed to make him famous. There was the pea shooter for those who wanted vegetables on the go (instead he shot the cat in the eye and made him blind), the automatic wiper for the toilet (his dad ruined this when it surprisingly shot up to wipe when he was not expecting it), and the beauty salon for his mom (who still has blue hair). 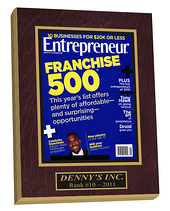 Bobs only way to get advertisement out was through his small towns local newspaper. The town newspaper did a story on bobs invention and he was sure it would spread the word. The people of the town hung his article in store windows, on the walls of restaurants, and all of the office walls in Bobs town. As tourists and strangers visited Bob's town they would pass by the newspaper article as if it was not there. Bob's great invention was soon forgotten as the newspapers started falling down, getting old and weathered, and becoming damaged.

Bob was not ready to give up. He needed to find something that would help get his article noticed so he called In The News.

In The News product preserves your great moments so you can relive them whenever you would like. There are many Samples to choose from to make sure you get the exact finished product that you were going for. In The News wants everyone to see your greatest accomplishments by showcasing them in a fabulous manner.

All Bob did was Contact In The News and they changed his life forever.

In The News worked with Bob to frame three of his articles with Bob's unique touch to showcase his Snack-A-Rator. Bob hung the three articles at the grocery store, a diner, and the local bar and all of a sudden the Snack-A-Rator took off.

Bob moved out of his families basement, bought a house in the Bahamas and is now enjoying popcorn from his Snack-A-Rator while watching football games, doing his triplets laundry, kissing his beautiful wife, and enjoying Mai-Tais on the beach. Bob has made many more inventions all of which are framed by In The News.

We hope you had fun with Billionaire Bobs story we sure did.

In The News, Inc. provides a specialty lamination and engraving service for businesses and individuals who have been featured in the media. Our custom wall plaques are the perfect way to professionally preserve your publicity & commemorate your achievement. Whether you are the CEO of an established corporation, a flourishing local business owner, or an individual whose been spotlighted – we offer a handsome and dignified way to mount and display your featured article.

Want to see you article today on a newspaper or magazine display frame.  Great get started right now click the button below and you will have your digital preview in 1 business day.