Sylvain Blouin is the founder of the Rock-N-Wash carwash franchise. Born in 1970, Mr. Blouin is an ardent lover of 1950's and 60's memorabilia. After spending his childhood on a farm in Quebec, Mr. Blouin earned a business degree in Montreal before moving west to learn English. A dedicated, hard worker, Blouin has done everything from raking sand traps to working for a Fortune 500 company.

Blouin held a senior leadership position for 18 years, during which time he oversaw not only hundreds of employees, but also major business mergers and corporate culture shifts.

Blouin's founding of the Rock-N-Wash car wash business was highlighted in an article in the Edmonton Journal in August of 2012 as well as being featured in an issue of the Edmontonian magazine.

Blouin has spared no expense ensuring that his car wash is a state-of-the-art marvel, having visited the Las Vegas International Car Wash Show to find new technologies and connect with suppliers.

Some of the technologies Blouin uses in his car wash include unique self-service equipment from Pumps & Pressure Inc., a 100-foot Belanger 'Touchless' tunnel wash, a sump pit system, a California water-reclaiming system, a pressurized environment to prevent misting, and free pinball machines for the kids.

Blouin is a dedicated, driven man who believes in his goals. His personal philosophy of "if you can dream it, you can achieve it" helped him to overcome obstacles to founding his 4.8 million dollar dream. 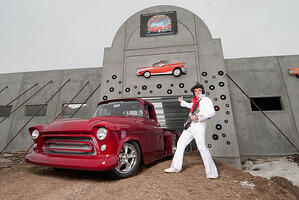 Blouin's love of the 50's and 60's era of Rock and Roll is made evident through his use of iconic figures in the décor of his wash locations. Not only does the interior of the building feature images of figures such as James Dean and Ray Charles, but the entrance proudly displays Elvis sitting in a 1957 Chevy.

Blouin has commemorated his achievements by preserving the stories of the founding of his new Rock-N-Wash business with In The News plaques for posterity's sake.

Now, Blouin has not only the memory of his rise to notoriety, but a physical trophy and reminder that he can share with friends, family, and new acquaintances. His accomplishments will live on the memory of everyone who sees his story which has been immortalized in plaque form. 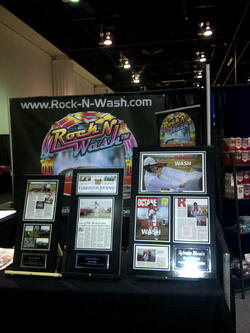 Blouin's In The News plaques do far more than just serve as conversation pieces, however. The presence of real news articles demonstrates to Blouin's customers the reality of his accomplishments in a way that is unmatched by impersonal trophies from faceless business review organizations. Customers can see the articles chronicling the history of Rock-N-Wash's creation and know that it comes from a news source they know and trust. Because the customer knows that the news article is real, it helps to establish in the customer's mind the authenticity and permanence of the Rock-N-Wash business.

Earning the trust of potential customers to transform them into returning customers is a central concern for any new business. New businesses thrive on building a positive reputation in the minds of first time customers. When a customer walks into a new business and can see the history of that business' positive press hanging on the wall they will know that they can trust that business because there is evidence of excellence present for all to see.

The permanence of these plaques versus a simple paper cut-out ensures that customers new and old will be able to see the proof of a business' newsworthy accolades for years to come.

Each In The News plaque preserves and presents Blouin's personal story in a tasteful and aesthetically pleasing manner that draws customer attention. The high-quality framing of every picture and story impresses upon customers the respectability of Mr. Blouin's business. The stately, professional engraving and overall appearance of Mr. Blouin's plaques enhances his customer's experience in a way that helps them remember Mr. Blouin and his story.

In The News is proud to have assisted Mr. Blouin immortalize his achievements for the entire world to see. May he experience every measure of success and happiness in his future endeavors.