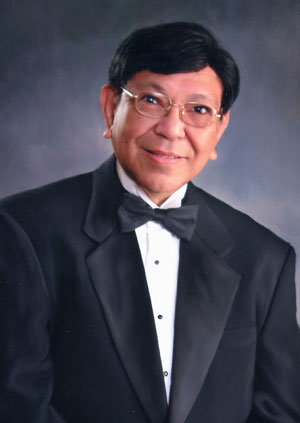 Composer, artist, writer, award-winning photographer, leader, plastic surgeon, pillar of the community, humanitarian and philanthropist are just a few of the titles used to describe Dr. Basilio N. Bautista of Delaware. This beloved renaissance man has spent decades serving the Delaware community as both a pioneer of aesthetic surgery techniques and as a constant contributor to the welfare of others.

Dr. Bautista began his medical career with residency training in general surgery at the Hahnemann University Medical Center in Philadelphia, and earned his MD at the University of Santo Tomas Faculty of Medicine and Surgery in 1960. In 1972, he went from being a teaching fellow of anatomy and research fellow of plastic surgery at the University of Manitoba Medical Center to start his own practice in Dover, Delaware. From there, he went on to make notable achievements such as the establishment of  the first non-hospital based surgery center with anesthesiologists to administer general anesthesia and was also the first plastic surgeon to use laser-based surgery for cosmetic procedures in the state of Delaware.

However, Dr. Bautista's achievements away from the operating table may exceed his contributions in the operating room. Not only has Dr. Bautista composed and subsequently produced and internationally distributed a CD of his musical compositions in the year 2000, he has served as president, vice president, regent, board director, trustee, or advisor of numerous professional and community organizations such as:

Another special achievement within Dr. Bautista's life includes receiving special apostolic blessings from Pope John Paul the Second on the 30th anniversary of Bautista's participation in the medical profession. He has also served as People to People Ambassador of Goodwill to China (1978) and Russia (1979).

Bautista's faith is reflected in the sheer effort which he undergoes to help others and in his own belief in the reason for his success. In his Worldwide Who's Who bio, as well as his Cambridge Who' Who bio, Bautista states that his success is the result of "hard work, unwavering faith in God, determination… he believes that he is not here by accident but design with a purpose." Evidence of Bautista's hard work can be found in his endless contributions and work for the charities and professional organizations he has joined or founded over the years.

Dr. Bautista's hard work has earned him numerous awards and special recognitions over the years, including:

Dr. Bautista was also given the 2012 Mayor's Arts Award during a Dover City council meeting "for his longtime support of the arts in Dover." His being presented with this award made the news in Delaware's newszap.com among other publications. In the newszap.com article, it is mentioned that Dr. Bautista is "only the second adult to receive the honor individually" and Dr. Bautista stated in the article that he feels that the award was special to him because he "received the award not for being an artist, but for what I have done for the art world."

Although Dr. Bautista is currently retired from active medical practice, he continues to be a presence in the lives of others through his charitable efforts. Through the Child HELP foundation, Dr. Bautista continues to help improve the quality of life for children with disabilities in Delaware. As reported by the Cambridge Who's Who, one of  Dr. Bautista's goals is to expand the Child HELP foundation's reach beyond the state of Delaware to help more disabled children across the country.

Dr. Bautista has accomplished so many newsworthy achievements throughout his years of pioneering medical practice and selfless devotion to the betterment of his fellow man. In The News is privileged to help such extraordinary people immortalize their accomplishments for posterity by taking their headline news articles and preserve them in attractive plaques that can be displayed with pride for years to come.

With every In The News plaque comes the peace of mind from knowing that your story will be preserved for the benefit of your children, their children, and generations beyond. Stories such as Dr. Bautista's success as both a professional plastic surgeon and as a world-renowned philanthropist can now be preserved to help inspire future generations for decades to come.

Dr. Bautista himself can add another cherished keepsake to his collection to use as a conversation piece and reminisce with his friends and loved ones about his long list of lifetime achievements. When visitors both new and old see Dr. Bautista's plaque, they will be reminded of why he is such a greatly respected pillar of the community and will come to appreciate the great lengths to which Dr. Bautista has gone to support those who are most in need.

If you want to contact and work with Becky Leone, a senior sales rep who assisted Dr. Bautista on his order call 800-548-3993 ext. 3074 or email bleone@inthenewsonline.com