To Honor Thy Father With A Plaque: Tim Collett And His Camaro 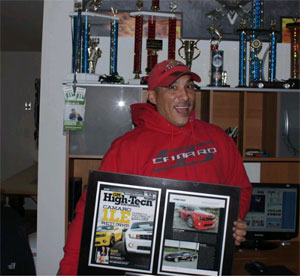 Timothy (Tim) Collett is the co-owner and operator of Harbor Cleaning & Upholstery along with his wife, Susan Collett. A dedicated native of the Oak Harbor, Washington area, Mr. Collett is determined to provide his customers with, as he reports on his company website, "reasonable, flat rate pricing, reliable, on time service and honest hard work." This eager entrepreneur even has a standing policy of besting his competitors' prices by a minimum of 10% on all of the services he provides.

Although Mr. Collett is a tireless worker, it is not his contributions as a member of the Oak Harbor Chamber of Commerce which has earned him the media distinction for which he is the most proud. Collett is in fact most proud of his prize-winning 5th Generation Camaro. Recently, Tim Collett's Camaro placed first in the "Cars Altered" category of the North Whidbey Car Show.

This list of customizations does not account for even half of the modification work that Collett has lovingly put into this vehicle.

This would lead one ask the question of why. Why would Collett put so much work into modifying and detailing this one car? Does he do it just to trot it out for car shows for recognition?

While Mr. Collett has won competitions with his custom rig, and has even been featured in publications such as "GM High-Tech Performance Magazine" and the "Hot Rod Magazine" because of the breathtaking amount of work that has been put into his custom Camaro, he did not fine-tune this automobile into a state of perfection for his own sake. Collett dedicated himself to the perfection of this rig in order to honor his late father, Charles "Da Wild Man" Collett.

Charles Collett was a dedicated, 30-year career Navy man, a Vietnam War veteran, and two-time recipient of the Purple Heart. When not on assignment serving his country overseas, he was known as "Da Wild Man" in racing circles, winning several championships during the 1960's and 70's while driving a '68 Camaro. Charles passed on his knowledge of and passion for Chevrolet vehicles to his son, Timothy.

As Tim Collett says on his Camaro Forums profile page, "my passion for Chevrolet & Camaro started when I was a kid and I still have that passion to this day. I have never owned anything but General Motors my whole life." Before Charles passed away in October of 2010 from liver cancer, he told his son that "the 5th Generation Camaro could not get there quick enough," referencing the fact that the 2010 Camaro SS would not be available until after his death.

So, once the new Camaro was out, Tim Collett decided to honor his father's memory by getting the new Camaro and customizing it the way he had been taught to by his father. Every single modification done on this vehicle serves as a testament to the son's love of his father and the knowledge and values instilled in him from an early age. As a part of honoring his father's last wish to experience the 5th generation Camaro, Tim also painted a portion of his father's ashes into the front bumper blackouts of the vehicle so that a part of his father could be with him wherever the car goes.

In order to further immortalize his dedication to his father's memory, Tim Collett decided to preserve the "GM High-Tech Performance" article highlighting the story of this memorial on wheels in his very own custom plaque.

With this plaque, Collett will have a permanent reminder of how his story, and the story of his father, has been shared with fellow motor vehicle enthusiasts across the nation. Mr. Collett's custom-engraved and designed plaque will preserve the details of his story so that it can be shared with family and friends for decades to come.

Having a physical copy of his article will allow Mr. Collett to share his tale with others long after the magazine itself has stopped circulating that issue. The attractive framing and professional engraving will serve to draw attention to his story and generate conversation as well as keeping the memory of his love of his father alive for others to see.

In The News was happy to help Mr. Collett craft his memorial keepsake to honor the memory of his father and to preserve the article showing his achievements in the field of high-quality Camaro customization for the entire world to enjoy. It is our hope that he continues to enjoy success and recognition in the eyes of his community as both a businessman and a family man whose love of his family will continue to inspire his actions.