Plaque Featuring Turning It Around: The Independence Public Library 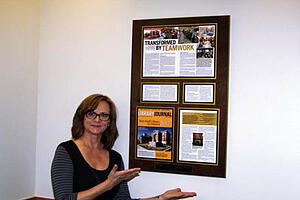 In 2009, the Independence Public Library (IPL) was slowly dying. Funding was down, attendance was down, and the library was faced with the very real risk of closure. It was during this time of crisis for the IPL that Julie Hildebrand was promoted to being the director of the small-town library.

Two years after Hildebrand took over the responsibilities of overseeing operations at IPL, the situation has changed dramatically. As noted by the Library Journal, IPL "has won awards, garnered grants and increased tax millage, and built programs and services that are 'packing 'em in' to 220 Maple Street from all over independence." In two short years, Hildebrand turned a dying small-town library into the best little library in America. That is not an empty boast, either; the IPL has won the 2012 Best Small Library in America Award from the Bill & Melinda Gates Foundation and the Library Journal.

The journey of the IPL from its status as a failing library to becoming the best small library in America was not an easy one, however. As Hildebrand states in her interview for the Library Journal, "The library was dying… I knew we didn't have enough money to keep our doors open. We had to make some drastic cuts and hard decisions, and we kept the library open." Fortunately for the IPL, Julie Hildebrand is not a woman who gives in easily.

Shortly after becoming the director of the IPL, Julie Hildebrand began working on forming connections with the community to raise awareness of the IPL in order to generate the advocacy needed to obtain a bigger budget as well as other grants and donations. To achieve this, Hildebrand and the staff of the IPL turned to the national Geek the Library campaign administered by the Online Computer Library Center (OCLC) and the Gates Foundation. This initiative, designed to highlight the importance of public libraries and generate support for local libraries. The IPL staff attended local festivals, bringing Geek banners, book bags, rub-on tattoos, wristbands, and balloons to give away to local residents. A local community group called the Friends of IPL helped out by buying three months of radio advertising to increase awareness. Eventually, the IPL Geek committee planned its own "I Geek" event to get local businesses involved.

Of course, the IPL has done more than just used local events and radio waves to promote themselves. The small-town public library has also used the power of social networking in order to reach out to the world and grab its attention. As Hildebrand said in her LJ interview, "social networking is one of our main sources for effective marketing. We have a number of Facebook pages, including one for our library cat, Trixie!" In addition to Facebook, the library staff maintains active Twitter, Flickr, and Tumbler accounts in the effort to keep the public thinking about the Independence Public Library.

The increased public profile of the IPL through social networks and local community events has done the little library a world of good. In the short time since Hildebrand took charge, the IPL has won numerous grants and awards including:

The Clifford the Big Red Dog award was won based on the IPL's youth outreach program. Being located in the county with the worst unemployment rate in the state, and second to last in state health rankings, students of schools in the area near the IPL often only get regular meals from free or reduced cost school lunches. The IPL's Youth Activity service provides these children with the food that they need so they will not have to go hungry on weekends or during summer.

In addition to the youth program, the IPL has also coordinated with the Kansas Migrant Education program to provide English as a Second Language (ESL) courses for migrant workers as well as providing computer education classes for senior citizens to teach them how to file for Medicare part C and D online. Such outreach programs demonstrate the IPL's dedication to strengthening ties with the local community and improving the quality of life for those in need.

Under Hildebrand's leadership, the IPL has even turned several "problems" into ways of expanding community involvement and membership. When police recommended that the library staff ban the homeless from gathering behind the library, the IPL began a program to turn them into card-carrying members of the library. Problematic, unruly teenagers were introduced to support programs designed to engage their interest and turn the troubled teens into active volunteers.

With so many awards, recognitions, public-service oriented programs and its dramatic resurrection from the dead, it is little wonder that Hildebrand's library was able to garner the award for the Best Small Library in America from LJ and the Gates Foundation. Independence Public Library managed to beat out other contenders for the title such as the Dover Town Library in Massachusetts and the Decatur Public Library in Texas, both of which boast impressive uses of technology and public interaction.

To celebrate the Independence Public Library's accomplishments, Julie Hildebrand and the staff of the IPL decided to immortalize the Library Journal article detailing their library's tale of overcoming near-death to become the best small library in America with their very own In The News commemorative plaque.

Both patrons and staff of the IPL can see the exquisitely framed and engraved plaque and know the pride of having an award winning library in their very own town. This constant reminder of the IPL's newfound vitality and strength will serve to inspire the staff of the library by showing them how they not only survived, but thrived as a public library dedicated to helping the community of Independence, Kansas.

In The News plaques make for great trophies to highlight your most newsworthy achievements. Not only do they showcase your achievement, but they also allow everyone who sees them to read your story as laid out in the pages of your favorite publications.

It was our honor to help Julie Hildebrand and the IPL commemorate their achievement in winning the title of Best Small Library in America 2012. It is our hope that Hildebrand and her library continue to be a positive influence in their community and make headlines doing so.