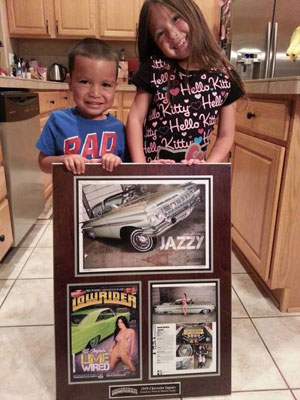 Pierre Suranto is no stranger to the pages of Lowrider magazine. Back in August of 2005, the up-and coming musician known as "Smoove-P" was featured in Lowrider because he was getting married to one of the magazine's models atop one of his custom Chevy Impalas. The model was a woman named Melanie who Pierre had met when Lowrider was shooting pictures for a February '04 article about his 1961 Chevy Impala.

Since settling down with his beautiful wife, Mr. Suranto has had two children and several more Chevy Impalas. Suranto has also moved from being a musician to becoming a business development manager, as his status on the LayItLow.com forums declares.

Obtaining, restoring, and customizing Chevy Impalas has been something of a lifelong passion for Mr. Suranto, and he has achieved notoriety several times for it. His custom jobs reliably finish in the top three at car shows such as the 2008 San Antonia Mustang Club car show where Suranto's '59 Impala, nicknamed "Jazzy," placed second in the MMI (Multi-Media Interface) category of the event.

Taking the '59 Impala to the top three of the car show is an even more impressive feat when one considers that the car was once condemned, as the Lowrider article states, "to suffer a horrendous slow death" because of "intense New Mexico weather." The article is vague on the details of the damage done to the vehicle before Suranto restored it to its former glory and beyond, but given the climate of the barren New Mexico desert, corrosion, sun damage, and sand in the engine would be the least of Suranto's challenges in his restoration of the classic machine.

How did Suranto take a decayed husk and turn it into a prize-winning show-stealer? First, Suranto had to dismantle the vehicle piece-by-painstaking-piece. Then, Suranto used his connections with his friends in the automotive circles in the San Antonio area to have the various parts and pieces he was taking from the Impala repaired or replaced by Metal Touch Plating of San Antonio. Suranto decided to keep the old 348 V8 engine in, completely overhauling it in his own garage with the help of a mechanic named Frank Chapa.

After reassembling the frame and body of the Impala Suranto had a man Lowrider describes as "one of San Antonio's finest upholsters," Jerry Vincent, replace the interior upholstery with new suede, vinyl, and leather pieces with a hand-stitched dash cover and a matched toddler seat for Suranto's youngest child.

Still a music-lover at heart, no matter what his job title is now, Suranto made certain to install a heavy-duty sound system into his ride to give it the true audiophile's touch. As noted in the Lowrider article, "Jazzy" has "a Zune docking station that directly connects to two Audiobahn ADT 1800 amplifiers, a trio of 12-inch dub1200 subs, a 6x9, and a 6-inch speaker." The speaker and radio might be factory spec, but the amps and subs make sure the sound of this lowrider is anything but ordinary. These modifications to the Impala's sound system are largely responsible for its many car show victories.

Other features of Suranto's Impala reveal that he is a family man at heart. Not only does the Impala have the aforementioned car seat, the fenders feature custom painted portraits of the Suranto family. Pierre also took advice from his wife Melanie on the customization of his vehicle. According to Lowrider's article, when Pierre wanted to install a hydraulic lift system in the car, his wife vetoed the idea in favor of an "airbag" system consisting of "ViAir 380 compressors, fitted with two 5-gallon tanks."

Suranto's '59 Impala, like his '61 and '69 Impalas before, has garnered national attention within the pages of magazines such as Lowrider. Recently, Pierre decided to celebrate his latest entry into the pages of the custom car magazine by immortalizing the article with an In The News plaque.

Now, Mr. Suranto and his family have a keepsake that will serve as a cherished reminder of how their shared enthusiasm for cars made it into the pages of their favorite publication. Their custom-built, professionally arranged and engraved plaque will keep the memory of Suranto's success among his peers in the automotive enthusiast community alive for years to come. The Suranto family was so pleased with their plaque that they sent In The News a photo of their children proudly holding up the plaque featuring the article about the '59 Impala called "Jazzy."

In The News plaques make for excellent keepsake to record your family's news-making achievements. With every plaque comes the peace of mind from knowing that your story will not be forgotten so long as your tale is preserved by one of In The News' custom plaques.