Remembering 9/11 - The Heart of Steel 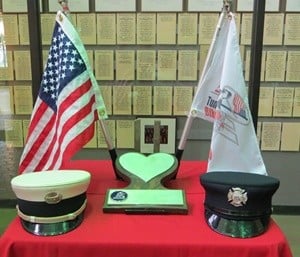 September 11, 2001 is a day that Americans will never forget. From the wealthiest businessmen who were busy brokering million-dollar deals on the east coast to young schoolchildren still asleep in their beds on the west coast, odds are if you ask them where they were when the towers fell, they can tell you exactly where they were at that moment on that day.

On 9/11, over two thousand employees in towers one and two lost their lives for the simple offense of showing up to work on time. In addition to the thousands of worker deaths, there were 343 fatalities amongst firefighters and paramedics who responded to the disaster, 37 casualties among port authority officers, and 23 casualties among NYPD officers. It has been estimated that fully 20% of all Americans either knew or were related to someone who died in the 9/11 terrorist attacks.

It is important that, as a nation, we honor the memories of those lost to the tragic events of that day.

Orange County Choppers, the custom motorcycle company made famous on the Discovery Channel's reality TV show American Chopper, created a memorial plaque called "The Heart of Steel" in order to remember the tragic events of 9/11. This plaque, forged from steel salvaged from the site of the disaster, serves as both a reminder of the losses suffered and of the renewed strength of the American people. What was torn down by hatred can be remade into a symbol of the undying hopefulness and optimism of the American spirit.

Since its creation, the Heart of Steel has traveled from firehouse to firehouse throughout the country. At each station, firefighters were able to view the plaque and remember the day that shocked the nation to its very core.

In an interview for rrspin.com, Fire Chief Stacy Coggins of the Roanoke Rapids Fire station called the Heart of Steel "a piece of history" and said that the plaque reminded him that "We don't get into this for the recognition. We do it because we want to help. I'm sure that's what was on the minds of all the rescuers that day."

For the brave men and women who work in emergency fire rescue this plaque is more than just a piece of metal, it is a call to action and an inspiration. While they may not do it for the recognition, please, take a moment to remember the brave souls lost on 9/11, and all the other selfless sacrifices made by these courageous men and women throughout the year. The next time you run into an officer or firefighter on the street, let them know how much you appreciate their service.

Recently, the plaque was put on display at the Delaware Academy of Public Safety and Security in New Castle. The Heart of Steel was part of a display where students of the charter school could learn about the events of 9/11 and its impact on the nation. Chief Goode of the Wilmington Fire Department said in an interview posted on Newsworks.org that "for a lot of children, they weren't even of age when this happened so it was a good opportunity for them to understand what it's like to risk your life so others may live." By using the plaque as part of an educational display, future generations can share in the story of that fateful day and be made aware of the important role of their local emergency services.

Mementos such as the Heart of Steel keep alive the memory of important events in our nation's history. This serves not only as a reminder of what we have lost, but of how we can overcome tragedy and become a better, stronger people. This plaque is a hedge against the forgetfulness of generations and can help ensure that the American people never forget who they are and what they have come from, as well as to remind us all that life should never be taken for granted.

So, on this anniversary of the 9/11 terrorist attacks, take the time to call your loved ones, your old friends you have not talked to in a while, your estranged relatives. Hug your family and remind them how much they mean to you. Be a good neighbor, and love the people who live down the road as much as you would yourself. Life is too short to spend on hatred and remonstrations, so don't.

The Heart of Steel is a constant, immortal reminder that tragedy can strike unexpectedly, but it also reminds us that there are people out there who care. There are still good people in this nation who will give their one and only life for the sake of a complete stranger. Not for money, fame, or glory, but the simple sake of doing the right thing at the right time. 9/11 is a day that should never be forgotten, but with reminders such as the Heart of Steel and the efforts of the Tunnel to Tower Foundation, we can ensure that the memory of 9/11 and the heroes who died that day never fades.

If you would like to learn more about how you can contribute to preserving the memory of 9/11, or would like to help the Tunnel to Towers foundation, please visit their website to learn about their schedule of events.

Wishing everyone across the nation a safe day,

In The News Online.

Tags: In The News, Memorial