High Rise Escape Systems is a Florida-based company that provides emergency escape and response devices for high rise buildings. Why the specialization in safety devices for high-rises? As the company's own homepage tells visitors, "99% of the world's fire ladder trucks cannot reach above the 7th floor." This means that office workers in large metropolitan skyscrapers would not be able to evacuate down the ladder of the average fire truck because they are often more than 10-20 floors away from the ground.

Another problem with evacuating a skyscraper is that most skyscrapers do not have an exterior fire escape ladder. One of the largest fire escape ladders on record is the one on the Book Tower and Building, which covers an impressive 38 stories of the 475 foot tall structure. However, skyscrapers can exceed 1,000 feet in height (currently, the largest building in the world stands at a whopping 2,722 feet, which is slightly taller than Canada's Mount Carleton).

Imagine trying to climb down more than 60 or 70 floors of a building on the outside during a mass panic scenario, as every other person in the building tries to crowd onto a single external staircase that has been subjected to the abuse of the seasons, and is now being overloaded with several tons of panicking humans. For most, being that high off of the ground would induce sensations of vertigo on a calm day. With the added panic factors of fire and crowding, trying to climb down a ladder on the outside of a building that is as tall as a small mountain becomes exceedingly difficult and dangerous. This is not to mention wind shear and the possibility of the fire escape collapsing under its own weight.

Worse yet, fires inside the building can prevent victims from reaching the access point for the fire escape on their floor, rendering it completely useless.

So, in order to correct this flaw in current fire and emergency escape techniques, High Rise Escape Systems was born. The goal of the company: to provide reliable, easy-to-use methods of escape to people who live or work in high-rise buildings. Leveraging several technologies, including an evacuation suit based on a "Recoverall" design credited to Robert Kirkland and the use of either permanent or portable "Swing Arms" that can deploy automated winch-like devices to lower evacuees gently to the ground. The suit encases the user, protecting them from flame and smoke while also providing a blinder effect while they are being lowered. The blinder effect means that while in the suit, users can rest easy and not focus on the height of their descent, alleviating sensations of vertigo and reducing the level of panic and stress they would otherwise experience. "Out of sight, out of mind," as the old saying goes.

Since its founding, High Rise Escape Systems has joined numerous organizations such as:

As a member of these organizations, High Rise Escape Systems is dedicated to protecting the populace from both accidental incidents and from the threat of terror attacks such as the 9/11 attacks on the World Trade Center. In fact, High Rise Escape Systems was founded in response to the tragic events of that day in order to bring to the world technologies and products that can prevent the loss of life caused by such events. 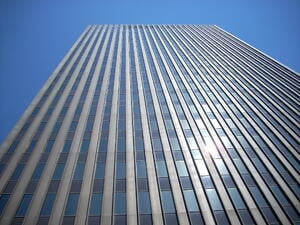 The measurable quality and success of their emergency escape systems might explain why High Rise Escape Systems was granted a United States General Services Administration contract back in 2008.

Over the years, High Rise Escape Systems has had several plaques and trophies made to commemorate their achievements as a disaster prevention product distribution company. Their latest plaque, a beautiful gold and mahogany piece that showcases the company's latest article in the Orlando Business Journal, details how High Rise Escape systems has partnered with other local businesses to make his escape system affordable on the budget of the average American family.

With these plaques in their offices, High Rise Escape System's workers can take pride in knowing that their company has touched the community and is helping to save the lives of their customers. Such displays remind workers why they do what they do and drive home the importance of their work.

Every In The News plaque and award comes with the security of knowing that your achievements will be professionally arranged and engraved to be attractive and eye-catching, and customized so that they are never out of place with your office's décor. From traditional wooden plaques for a law office to sleek, modern acrylic designs for technology-oriented businesses, In The News plaques and awards can be proudly displayed anywhere.