Reining in the Plaques: Tim McQuay 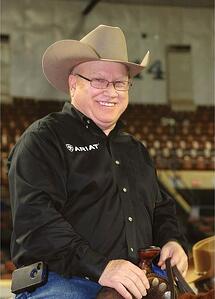 Who is Tim McQuay? Ask any die-hard fan of the sport of Horse Reining and you will probably hear a very long list of this indomitable rider's achievements, including but not limited to:

The list of Tim's accomplishments as a reining horse rider, trainer, and breeder goes on and on. This collection of achievements comes as the result of over three decades of hard work and dedication. As Tim's website informs readers, Tim earned his first NRHA paycheck in 1978, and in the 30 years after that, he has "qualified for the NRHA Futurity finals every year but one since." In 2008, at the age of 56, McQuay qualified three separate horses for the finals.

Even before that 2008 Futurity event, McQuay demonstrated his indomitable spirit as a champion reining horse rider. In 2001, Tim was diagnosed with a life-threatening illness, but he still rode Kanjiro Tokita's Smart Miss Marker to a Futurity Finalist spot that same year. It is this unshakeable drive to excel as a reining horse rider that has earned Tim his distinction as "a true reining titan."

Currently, Mr. McQuay is a three-million dollar rider, and has shifted his focus from riding reining horses to providing nutrition, training, and therapy to reining horses. Tim practices a "horses first" philosophy when it comes to training and breeding. One of the core tenets of the McQuay stables philosophy is that the "horses stay happy and in good spirits." Tim makes certain that the horses are comfortable, well-fed, and are given the appropriate amount of time for physical activity to ensure that they are as healthy as possible. This practice has paid off in spades for the McQuay family, as they have produced a large and lucrative stable of high-value horses.

Speaking of the McQuay family, Tim's wife, Colleen McQuay, is also an accomplished rider who has numerous USEF (United States Equestrian Federation) championships and even some AQHA World Championships under her belt as well. For more than 25 years, Colleen has worked with her husband to train both horses and riders for NHRA events. In fact, students and horses trained at the McQuay stables have gone on to win AQHA World Championships in the Youth, Amateur, and Open events in addition to USEF championships and Congress Titles. Colleen maintains an active presence in the world of equine sports, and serves to this day as a founding board member of the United States Hunter Jumper Association (USHJA), and is the chair of the Hunter Development Task Force.

Tim and Colleen's children are no strangers to success on the field as well. Mandy, the daughter of the McQuay family, was coached by her mother early in life, and earned top ribbons as a junior rider. Mandy has been declared the Grand Amateur Owner Hunter Champion at Cincinnati and she was Amateur/Owner Hunter Champion in seven out of nine competitions throughout the country on River Rodes.

Mandy eventually married Tom McCutcheon, and together the two are registered as NRHA Million Dollar riders. Also, their children are proving to be forces to be reckoned with as reining horse competitors. Mandy's son, Cade McCutcheon, has already racked up impressive victories at the young age of 12, earning $40,000 at the Cinch NRHA Non Pro Futurity just a few days before his grandfather Tim broke the $3 million lifetime earnings milestone. As of the time of this article, Carlee McCutcheon is still in training for her first competition.

Tim McQuay has successfully shared his passion for and skill at horse reining with the members of his family, and built a strong following in equine sports while doing so. Tim and his family have truly been an essential factor in shaping the face of equine sports. As Tim's own webpage says, "his training program for professionals and Non Pros is one for the ages - and one that many others admittedly have imitated." Tim's influence on equine sports is so great that his training programs have become required reading for others who want to be successful in NRHA events.

While the McQuay family was originally based in Minnesota, they moved to Tioga, Texas in 1989, and that north Texas town has become a focal point for people who are interested in equine sports ever since.

Over the decades, Tim and his family have made headlines in numerous publications about horse training, riding, and breeding, including NRHA Reiner, American Quarter Horse Journal, Show and Tell, and Quarter Horse News. To celebrate both his and his family's accomplishments, Tim McQuay has commissioned dozens of article plaques as trophies to preserve the milestones in the McQuay family.

Each plaque in the McQuay homestead helps preserve the memory of every victory and career milestone not only for the McQuay family, but for their friends as well. New visitors to the McQuay estate in Tioga can see the wall of plaques and see for themselves the history of excellence Tim and his family have when it comes to training and breeding reining horses.

Each one of these plaques is designed to last for decades, preserving the tale of Tim's rise to horse-reining superstardom for all to see. The professional custom arrangement and engraving present on every In The News plaque ensures that the McQuay's story is presented in the most attractive manner possible and draws attention to real-life publications that readers know and trust. Having an article from a trusted publication reinforces the credibility of any business, and credibility is an invaluable commodity for any business owner.

If you would like to contact Cliff Matthews, an account executive who has helped Mr. McQuay with his plaque orders, please call 1-800-548-3993 Ext. 3083, or email him at cmathews@inthenewsonline.com.