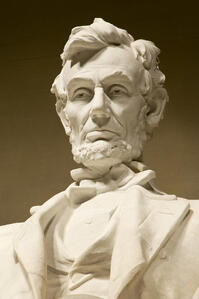 For the last 108 years, students at the Northeastern Illinois University in Chicago have passed by a specially dedicated building adorned with a plaque honoring the memory of Abraham Lincoln, one of the most celebrated leaders in U.S. history. This century-old engraved plaque reads:

THIS BUILDING IS DEDICATED TO

PUBLIC SERVICE HONORING THE MEMORY OF

This plaque is enraging Republicans in the windy city.

Republican party supporters such as Charlie Kirk, the founder and Executive Director of a nationwide group for young conservatives called Turning Point USA, are calling for the plaque to be taken down and replaced with a new one. Kirk has even called for a fact-finding mission to see if the plaque has ever been replaced or modified from its original state.

The university itself is quick to defend the plaque, stating that "according to building archives, the word democrat was used because Lincoln was an advocate for democracy—the political or social equality of all people… the word was not chosen to reflect a political affiliation."

However, Kirk and other Republicans are also quick to assert that the word choice of the plaque is "very deceiving, especially in the political climate we're in" and that the plaque needs to be amended or replaced entirely.

Why is This an Issue Today?

The plaque, which has adorned the walls of the Frank Lloyd Wright Building since 1905, has gone largely unchallenged for over a century. So, the question becomes: "Why now?" Why has this plaque become such a hot-button issue today?

However, why wouldn't word of mouth bring this plaque's declaration of Lincoln's political status as a "democrat" before? As the university stated, it may have been understood at the time that the word democrat as it was used in the plaque did simply mean a supporter or advocate of democracy. As such, the language of the engraving may not have been a matter of concern in the past.

It is unfortunate that the plaque's language is vague by today's standards. For one, the font of the plaque is in all upper-case lettering, making it difficult to sort out whether the engraver meant "Democrat" with a capital D, indicating Democratic Party, or "democrat" with a lower-case d, indicating a simple advocacy of democracy.

The next problem with this plaque is the complete lack of punctuation. If you look at the image of the plaque, you may notice that the spacing between the words "LINCOLN" and "DEMOCRAT" is slightly larger than the spacing between other words on the plaque, indicating that there is a missing piece of punctuation, such as a hyphen or period. This could possibly be the result of engraving practices at the time, which would have charged by the letter for an etching such as this one. The misunderstanding caused by the plaque's language could actually be the result of a cost-cutting measure to reduce letter count!

The third reason why this plaque may have garnered so much attention recently is the recent political tensions between the two leading parties. Republicans see this plaque as an attempt by the Democrats to co-opt their party's history, and are concerned that the achievements of one of their most celebrated party members may be associated with their opposition because of this plaque.

The university, on the other hand, sees the plaque as an important part of their history and of the message that they are attempting to work into the studies being carried out in the Frank Lloyd Wright Building. For them, changing the plaque would damage the integrity of their mission to educate and promote sociopolitical equality.

Should the Plaque be Changed?

The question, ultimately, is "who's right?" Should a plaque that has been on display for over a century be changed simply to be politically correct? Or, should a potentially misleading statement be allowed to be put on display in a place of learning?

It seems that there is no one right answer that will satisfy everyone.

So, what do you, the reader, think about the issues behind this "Plaque-gate" controversy? Does the plaque need to be changed or replaced? Why or why not? Share your thoughts on this matter in the comment section below.