Immortalize Your Athletes With a Personalized Plaque 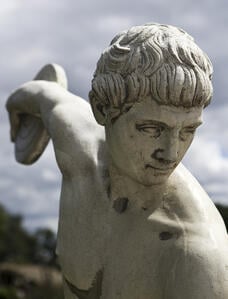 Other than the fact that they are all Olympic champions, their achievements have earned all of these athletes a certain amount of immortality. Michael Phelps' achievements have rendered his name synonymous with water-based athletics, having won more than a dozen gold medals for his feats of aquatic prowess. Because of this, the name of this modern Olympian will not fade from memory any time soon.

However, will the names of modern athletes such as Phelps and Bolt be able to last as long as the memory of Milon and Melankomas from the ancient games? The ancient Olympic athletes were at the pinnacle of athletic achievement in their time, and the memory of their stunning accomplishments live on to this day. For example, did you know that, according to the Olympic.org website, Melankomas of Caria won the Olympic boxing championship of 49 B.C.E. without throwing a punch? It seems incredible, but the story states that "he was reputed to fight for two days holding his arms out without ever lowering them."

How can We Still Know the Stories of Ancient Athletes?

How did the stories of the ancient athletes survive to this day? As recounted by dedicated historical sites such as ancientgreece.com, not only were there three major ancient historian who made a concerted effort to preserve and record the knowledge of the ancient world (Herodotus, Thucydides, and Xenophon), but that we know what we do about the ancient world because of "temples, sculpture, pottery, artefacts, and other archaeological findings." While the occasional piece of papyrus may somehow wind up surviving into the modern era for archaeologists to discover, many of the most famous stories from ancient Greece are preserved with more durable artifacts, such as the pottery, sculptures, and temple murals that you see in history channel specials about ancient Greece.

By placing the images of these stories in permanent objects designed to weather the passage of time, the ancient Greeks gave their stories the ability to last long beyond the lives of the athletes they sought to immortalize. That is how the stories of athletes from the year 540 B.C.E. have survived to be presented to the people of the year 2013 C.E.

Whenever an ancient Olympian became a champion, he would be honored with statues and pottery to commemorate and celebrate his victory (the term "he" is used here because women of the ancient world were forbidden from even watching the games, much less competing in them, exceptions to this rule were exceedingly rare). These physical pieces of memorabilia are why we have a record of the ancient Olympic competitions and their victors.

Preserving the Achievements of Today's Athletes

The athletes of today have every right to expect the memories of their achievements to last just as long as the achievements of the ancient athletes, but how can you celebrate your favorite athlete's accomplishments in today's modern world? E-cards are opened once, and quickly forgotten about afterwards. A dedicated website only lasts for as long as you are willing and able to continue supporting it. You want a trophy, a memento, something that can withstand the test of time and allow future generations to discover the story of your favorite athlete and appreciate his or her achievements just as much as you do.

Have you thought about creating a personalized plaque for your athlete?

Much like the pottery of the ancient world, a plaque is built to withstand the elements that can so quickly ravage simple paper and preserves the story that they commemorate for others to witness. From the little league championship game, to the heights of the world stage at the Olympic competition, you want to save that moment in time when your athlete, big or small, transformed into a champion.

A plaque is the perfect keepsake to show off your pride in your favorite athlete for years to come. Whether you save an entire article of their championship event, or just a photo of them with their gold medal, you can save their story by encasing it in a custom plaque that is designed to last. The plaque creation process prevents the article from becoming yellowed, cracked, or torn so that when others see your plaque decades from now, they can read the story as if it had been printed just the other day.

If you are organizing a sporting team or event, you can create your very own hall of fame by hanging up the plaques of your star athletes to provide an example for other, younger athletes to follow. Encouraging a little competitive spirit by giving new athletes a goal to beat is almost always a great way to motivate them.

Whatever the reason, you can immortalize your athletes with an attractive, professionally arranged and engraved plaque today and keep the memory of their achievements alive for years to come.

If you would like to create a perfect plaque for your favorite athlete, try out our custom plaque creation process today, or contact us at 1-800-548-3993.