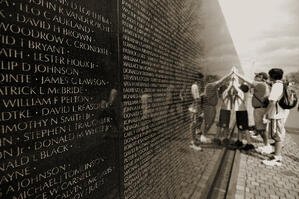 The Vietnam War remains one of the most controversial and infamous wars that the United States of America has ever been involved in. This war, which officially began in 1954 (Dwight D. Eisenhower pledged support to South Vietnam's Ngo Dinh Diem in 1955), saw more than half a million American military personnel become embroiled in the conflict over its nearly two-decade long lifespan.

As recorded by the History Channel, "more than 3 million people (including 58,000 Americans) were killed in the Vietnam War." Of the nearly 58,000 soldiers who died during the course of the war, 11,465 were under the age of 20. The sheer scope of the casualties in the war shocked the American public.

Public outcry in response to the casualty reports of the war and the news of massacres divided the nation. In the end, when Nixon finally ordered the withdrawal of troops from Vietnam in 1973, the soldiers who served their country in that conflict came home not to the ticker-tape parades of victors, but to a country of people who could not understand or relate to the horrors that these veterans had lived through.

Even after the end of the war, the casualties of the war were still growing. Many soldiers who initially survived their wounds would later die from medical complications caused by old injuries.

Worse yet, when the military spread the infamous herbicide Agent Orange over the thick Vietnam jungles in an effort to clear the dense foliage to expose Vietcong troops, the American soldiers ended up inhaling the toxic substance. The Veteran's Affairs office has linked Agent Orange exposure to an extensive list of horrific health complications, including:

Even the children of these veterans cannot seem to escape the effects of this chemical, as newborns of Vietnam vets are sometimes born with mild to severe birth defects that has been attributed to their parent's exposure to toxic chemicals.

While almost every American knows of the Vietnam Memorial, the somber, v-shaped wall of black granite that is inscribed with tens of thousands of names of the servicemen who gave their lives in service to their country, there is a relatively recent addition to the wall that many may not know about.

This addition to the wall, called the "Vietnam War in Memory Plaque," was designed to address the countless Vietnam veterans who served their country but did not receive a place on the wall. For many veterans who died as a result of complications from medical conditions that they contracted while serving in the war, that place on the wall may never come.

Yes, there are still names being added to the memorial, such as the ten new names that were added back in 2012, but the memorial project was independently funded. Despite the best efforts of volunteer veterans support organizations, adding the names of every postwar casualty remains impossible, especially in light of the fact that the Department of Veterans Affairs does not comprehensively track the cause of death for every veteran.

The Vietnam War in Memory Memorial Plaque Project was formed in order to address what one veteran's widow called "a void at the Wall," which refers to the lack of names for postwar veteran deaths. This privately funded project, which started in the mid-90's, earned approval from Congress to make an addition to the memorial in the form of a ground-level plaque that would not bear any specific names, but would address the many postwar casualties of the Vietnam war. The inscription, which reads: 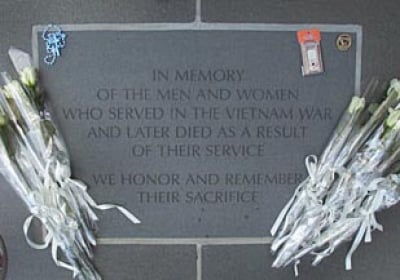 Much like the wall that it has been added to, the plaque was completed using only private funds, not one dime of the government's money went into the creation of the plaque, although it was supported by various members of Congress. The American Battle Monuments Commission (ABMC), cooperated with the Vietnam Women's Memorial Project, Inc. and the Vietnam Veterans' Memorial Fund, Inc., among others, to finance the assembly and installation of this critical patch to the gap in the memorial's coverage.

This memorial plaque may not be as large or as famous as the rest of the wall, but it is an important reminder of the sacrifices of our servicemen nonetheless. For every veteran who still lives with the aftereffects of the war, this plaque is a reminder that the American people have not forgotten your service or your sacrifice.

For future generations, this plaque will be a safeguard against the forgetfulness of decades. Each and every war veteran is more than just a faceless uniform. Every man and woman who enters the military has their own hopes and dreams, and are family to someone, whether they are a husband, wife, son, daughter, mother or father, and will be missed when they pass. The In Memorial plaque is a reminder of these all-too-important facts, and that not all casualties in war occur on the battlefield.

This plaque adorns the northeastern portion of the wall, quietly but stoically honoring all of the veterans whose service to their country cost them their lives, even years after the conflict they fought in has ended.

If you would like to learn more about the Vietnam Memorial, please visit the National Park Services' webpage about the memorial.

Tags: In The News, Photographs, Memorial