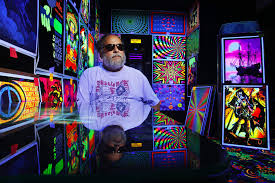 Joe Utterback was the owner of Penny Lane gifts, a specialty novelty and gift shop located in Springfield, Illinois.

Joe purchased the store chain alongside a business partner back in 1971, and he never looked back. Before becoming a psychedelic entrepreneur of novelties, Joe was a computer operator for Horace Mann, and sharpened his entrepreneurial spirit as a member of the Army. When he would make a trip to the vending machines for candy and soda, Joe would accept money from the other guys who were too busy to make the trip and keep the change for his services.

Penny Lane’s inventory of products covers a wide variety of products, including posters, t-shirts, lava lamps, incense, body jewelry, lighters, and more. Despite the eclectic nature of Penny Lane’s offerings, each and every product was carefully selected using feedback from customers and some truly ingenious forecasting of brand popularity.

In demonstrating how he learned to choose a product to carry, Joe liked to tell people about two particular products that help to shape his decisions to this day: Michael Jackson posters and Simpsons T-shirts.

During the early years of Jackson’s superstardom, Joe bought up thousands of posters featuring the pop star icon. The move to purchase so many posters turned out to be downright prophetic, as Joe was able to sell virtually every single poster he bought.

On the other hand, when Joe was first offered the opportunity to buy Simpsons T-shirts (ironic, given that the show is set in Springfield) in bulk at a bargain-basement price around the time that the show first launched, he declined the offer. This decision is one that served as a cautionary tale to Joe for the rest of his life. Instead of buying massive quantities of Simpsons shirts, he bought a very limited quantity, only to discover the massive popularity of the show later, when it was too late to get the deal price on the shirts. Joe sold every shirt he did order, but as he said, he “could have sold all of them” if he had made the bulk order.

These experiences taught Joe to connect with his customers, and learn what the major upcoming trends are directly from the people who come to his shop. This dedication to learning the needs and wants of his customers has resulted in a successful, if eclectic, mixture of products.

Back in May, Joe was honored in the local paper as running the “Strangest Place in Springfield” by The State-Journal Register. It is a label that Joe carried with pride, as it showed his own unique sense of joy and wonder as a business owner. Joe’s psychedelic store has attracted attention from cultural icons such as Tommy Chong, of the famous comedy duo of Cheech and Chong.

For more than 40 years, Joe’s shop has served the residents of Springfield by listening to customers, anticipating trends, and being a strange, memorable place. By listening to his customers, Joe knew to stock merchandise from runaway hit shows such as Sons of Anarchy and Duck Dynasty, which have been solid performers for merchandise for Joe and many other retailers.

After his feature in The State-Journal Register, Joe decided to have a plaque made of his featured article about his store. The reaction among his workers was instant: they loved it!

This plaque can stand in Joe’s shop and serve as a reminder to both customers and workers of the rich history of Penny Lane gifts, how the store has lasted for so long under the guidance of this good, fun-loving, hard-working man. Joe’s contributions to others have helped to shape the future of his family and friends, and will leave an indelible mark on those who best knew him.

Sadly, Joe himself passed away shortly after being honored by his local paper. In July, at the age of 66, Joe passed away. Now, it is up to his family to keep his memory alive, and to preserve his legacy for the future.

After his passing, Penny Lane held a tribute for Joe and Jerry at Douglas Park in Springfield. The tribute featured performances from artists and bands such as Perfunctory This Band, Rhythmspirit Performing, and Then and Now, all of whom volunteered their time to honor the memory of this pillar of the Springfield community. Such outreach from the community demonstrates how much this man was loved by those who visited his store.

We here at In The News are proud that we were able to help Joe immortalize his article about his store by sealing it within a plaque. It is our hope that his family and Penny Lane gifts continue to honor his memory, and remember him fondly whenever they see the plaque that he had made for him before his passing.

Joe Utterback’s memory will live on through those who knew him fondly. He was a very nice man who loved his work, and he will be missed. Wherever you are Joe, rock on.