In The News Presents the History of Gasparilla 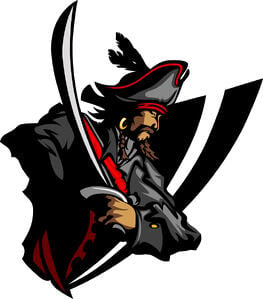 For over a hundred years, fun-loving folks living here in the beautiful Tampa Bay area have gathered together each year for a unique and interesting festival featuring an unusual theme: pirates.

The name of this buccaneer beer and boat-heavy festival: the Gasparilla Pirate Fest and Invasion, or just Gasparilla for short. This festival has been a part of the Tampa Bay community for generations, having started in 1904. Ironically enough, although the earliest celebration had a pirate theme, the “invasion” of Tampa Bay by pirates in Gasparilla was enacted on horseback in the earliest celebrations. The first naval invasion of Gasparilla didn’t happen until 1911.

The creation of the first Gasparilla is credited to Miss Louise Frances Dodge and George Hardee. Dodge, who was the Tampa Tribune’s society editor, and Hardee, the director of customs, wanted to make a memorable, lively celebration to make the typically mild May Day celebration more exciting. Well, if the more than 100 years of wildly popular pirate parades is any indication, we’d say that the duo was quite successful. Gasparilla is recognized as the largest pirate-themed parade in America, and the third largest parade overall, drawing over 100,000 participants to various events connected to the Gasparilla parade.

Here in the Tampa Bay area, Gasparilla is an institution, a part of our cultural identity. In most of the rest of the country, if you dressed like a pirate and paraded through the city streets, you’d probably get funny looks from people. However, in Tampa Bay, if you walk around dressed like a pirate, people here would be more likely to think that you’re just a little early (or late) for the big party. Either that, or you’re just a Tampa Bay Bucs fan (The Buccaneers and Raymond James Stadium regularly host and/or support Gasparilla-related events).

Every January, crowds of thousands of locals and tourists gather in the streets of Ybor City and downtown Tampa’s Bayshore Boulevard to throw parties and participate in the parade itself. Although everyone who’s grown up in the Tampa Bay area is used to the big event happening in January, that wasn’t always the case. As was mentioned before, the original Gasparilla event was conceived as a means of spicing up the May Day celebration with a pirate theme. Eventually, the main parade was held on an early Saturday in February so that more businesses could participate, and was then moved to the last Saturday of January in 2005, which has been the timing of the main event ever since.

The Legend of Jose Gaspar

If you were wondering why the celebration is called Gasparilla, it’s not because it rhymes with the alcoholic beverage sarsaparilla. No, the festival is named for the infamous pirate Jose Gasparilla (who may or may not have been real).

Legend tells that a Spanish naval officer named Jose Gaspar rocketed through the ranks of the navy, achieving the rank of fleet admiral at the young age of 27. Soon after, the young man became an attaché of the royal court of Charles the III, and became romantically involved with numerous high-ranking ladies.

However, Jose’s affairs could not be maintained forever, and he ended up angering the daughter-in-law of the king when he toyed with her affections like he had so many other women. Outraged at being abandoned in favor of another woman, the king’s daughter-in-law launched a plot to frame Gaspar for theft of the crown jewels.

Before his arrest (and probable execution) could be carried out, Gaspar somehow learned of the danger to himself, and he commandeered a ship named the Floridablanca to make his escape. From here, the once-celebrated naval officer turned pirate, assuming the name of Gasparilla and beginning a nearly four-decade long career of plundering the seas.

The legend says that for most of his pirate career, Gasparilla operated from a secret base in Charlotte Harbor, just to the south of Tampa. According to some versions of the legend, Gasparilla plundered more than 400 vessels during his pirate career, assembling an enormous hoard of gold, jewels, and other valuables.

The tale of Gasparilla ends with him announcing his intent to retire from the life of piracy at the ripe old age of 65 (which is incredibly old for anyone living in the 1800’s, let alone an active pirate). However, just as he was set to divide the spoils of his many decades of piracy with his crew, Gasparilla spotted what looked to be a wealthy British trading vessel in the distance. Leaving ten of his most trusted men to guard the twenty treasure chests that were to be divided amongst the crew, Gasparilla re-boarded his ship and gave chase to the vessel in the distance.

Much to Gasparilla’s chagrin, as soon as the Floridablanca closed to cannon range, the merchant ship dropped its British colors, rose an American flag, and opened up a veritable wall of gun ports. The “defenseless” merchant vessel was actually a heavily-armed warship of the U.S. Navy, the USS Enterprise. Unprepared for such heavy combat, too close to evade, and under-manned, Gasparilla was quickly overwhelmed by the trap.

Refusing to allow himself to captured, Gasparilla wrapped himself in heavy chains taken from the Floridablanca’s anchor, and cast himself into the waters, screaming defiance to his would-be captors to the last. As the legend goes, the pirate captain’s last words were “Gasparilla dies by his own hand, not the enemy’s!”

The men that Gasparilla left on the shore witnessed the outcome of the battle and on seeing their ship go down, they loaded the chests into a longboat and escaped on the Peace River. Accounts of what happens to the treasure vary, as they tend to do with old legends about massive treasure hoards. Whatever the truth, to this day believers of the legend still comb the beaches and swamps of Florida hoping to find the legendary pirate’s gold.

While the accounts about the history of this fun-filled Bay area festival might not always match up, we here at In The News love getting to participate in this parade each and every year.