Celebrate Gasparilla This Saturday with In The News! 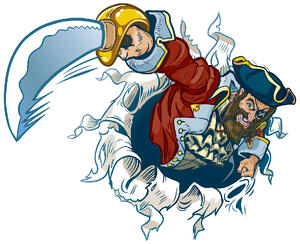 It’s that time of the year once more as buccaneers and pirate fans across the country descend upon the Tampa Bay area for the annual Gasparilla “invasion” and parade. On January 25 (this Saturday), the party will kick into high gear as ships manned by special pirate “krewes” sail across the bay and invade Tampa.

Ye Mystic Krewe of Gasparilla will be in attendance, as always. This year, however, they have something special planned. To celebrate 100 years of piratical fun, Gasparilla’s oldest, most venerated krewe is being followed by a new float featuring more than 30 past beauty queens from the Gasparilla beauty pageants of yesteryear.

More Than Just a Parade

Yes, that’s right, the Gasparilla parade this Saturday is not the only event held in Tampa Bay that is dedicated to the legend of the pirate captain Gasparilla and the overall awesomeness of pirates. There are also children’s parades, night parades, and innumerable other events as well. The sheer number of events surrounding the Gasparilla parade help to make Gasparilla more like an extended local holiday, as spin-off events and celebrations go on for weeks before and after the main parade is done.

For example, the Gasparilla beauty pageant we mentioned earlier starts on February 15, almost three weeks after the big parade is over. The pageant boasts numerous categories and special divisions for different age brackets and Krewe Ladies to compete in. Even the In The News crew is joining in on the pageant fun with our pirate costume contest on Facebook. Check out our Facebook page this Friday for the vote!

A week before the main event, there is a special parade for children, called the Children’s Gasparilla Parade, which is intended to be a family-friendly event that allows kids to get in on the pirate themed fun. This parade proceeds along Bayshore Blvd. for about 1.4 miles and features Gasparilla pirate krewes, marching bands, and community organizations in addition to the school organizations that take part.

Between the beauty pageant and children’s event, Gasparilla festivities last for almost a month!

Even dogs can get in on the sea-shanty fun at an event called Barkarilla. No, we’re not kidding, there is such an event, check out the Tampa Bay Times website. They have a video, it’s adorable. At the most recent Barkarilla, roughly 70 dogs and their owners paraded the streets before the main event. Personally, we’re waiting for the inevitable “Meowarilla” cat parade to rival Barkarilla.

A new addition to the Gasparilla event plan is the “Light Up the Night” after-party in Curtis Hixon Park. This celebration starts at 5:30, goes on to 10 o’clock, and features cover bands, food vendors, and fireworks.

If You go to Gasparilla… 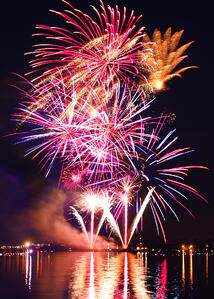 If you’re going to be in the Tampa Bay area this weekend, join us here at In The News as we take part in the celebrations. Truly, a mere photo cannot do justice to experiencing first-hand the sight of hundreds of ships sailing across the bay to the boom of cannons as they close in on the docks.

For people looking forward to the main event, we hope that you’ve reserved your seats in advance, because the crowds at the parade are always packed. If budget isn’t a concern, however, you can buy a spot in special bleacher seats the event for anywhere between $35.51 to just over $100 per seat. Be sure to bring some cash though, most of the food vendors attending the main event will not take debit, credit, or checks.

Remembering to set up early and bring some cash for your food and drink are only the beginning of the Gasparilla festival survival guide. There’s also parking to consider. As with any major parade (Gasparilla ranks as the third-largest parade in the nation), finding decent parking within the city limits is going to be tough. Much of the free parking within the city will be taken well in advance of the event.

With that in mind, you might want to check out one of the public parking garages, such as the ones located at the Tampa Convention Center to find reasonably-priced parking. However, this parking will also fill up quickly as well as the event looms ever-closer. Rather than losing your mind trying to find parking in Tampa on the eve of the world’s largest pirate festival, you might have less of a hassle finding a place to park in a neighboring city and hopping a bus, trolley, or taxi over to the main event.

Once you’re here, you can join in on an unforgettable night of pirates, parties, and parades. Although alcohol is allowed along the parade route and inside the event area, exercise caution with your pirate grog. Outside of the designated party zone, open containers of brew are still forbidden, and even in the party zone, big coolers are a no-no (snack coolers are okay according to the Tampa Bay Times).

As ever, driving while intoxicated is a bad idea, whether you’re driving a car or captaining a boat. Tampa cops are on the lookout for DUI and BUI (boating under the influence) offenders, so bring a first mate to be your designated driver/acting captain.

The crew at In The News looks forward to seeing you at the Gasparilla festival at 10 a.m. this Saturday. We all wish you a merry, and safe, day of pirate fun in the Florida sun, and a night of great parties. See you there, sailor.